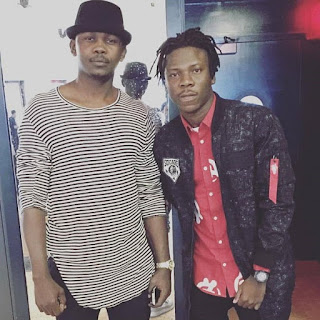 Road manager for multi award-winning Ghanaian dancehall artiste Livingstone Etse Satekla also known as Stonebwoy Burniton, Blakk Cedi has rubbished rumours that suggest the artist has parted ways with his management.
On Wednesday, September 6 2016, reports surfaced on social media suggesting the artist and his management had parted ways due to unknown reasons.
However, speaking to www.nydjlive.com, Blakk Cedi disclosed the management which included himself and Karl were intact and that the reports were false.
“The management is us. Myself and Karl and there’s no split anywhere.I find the reports quite interesting especially at a time when we are putting together our peace concert ahead of the December elections.”
Stonebwoy recently announced a peace concert which is scheduled to hold at the Ashaiman park on the 8th of October 2016.
Artists expected to perform includes Sarkodie, Samini, R2bees, Kwaw Kese, VVIP, Yaa Pono and many others.
Stonebwoy who was recently en-skinned Sapashini (dancehall warrior) by the Paramount Chief of Tamale, Gukpegu Naa (Naa Alhaji Abdulai) released a viral video to celebrate the recent success of the show held in Tamale.
Watch video from below.