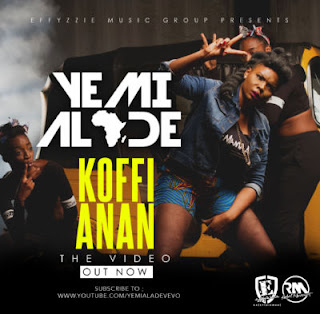 2015 & 2016 BET Awards nominee
Yemi Alade premieres the ultimate dance visual as the music video for her afro-pop dance anthem “Koffi Anan” .
The Philkeyz produced track is the bonus of her sophomore album
“Mama Africa: The Diary of an African Woman” released under Effyzzie Music Group . Yemi Alade is currently the most viewed African female act of all time, with over 80 million views on YouTube/Vevo to her credit. The energetic clip is directed by prolific cinematographer Paul Gambit .
Watch the dance visual below!
ON YOUTUBE

DOWNLOAD : Buju – Lenu (Remix) ft. Burna Boy – Tell me what I cannot do