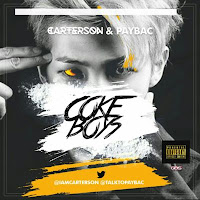 Two of Nigeria’s finest upcoming rap sensations, Carterson and one-half of the Lost And Found, PayBac , hook up in the studio and made a one-take freestyle titled “Coke Boys “.
Both rappers proved one more time why they are one of the best uprising emcees in Nigeria. Carterson has a mixtape, I Am Legend, and successful singles credited to him. He is also featured on top Nigerian rapper,
Pherowshuz ‘ forthcoming album. PayBac on the other hand has three solo mixtapes credited to him as well as a joint album titled ‘Face Off’ with crew mate and rapper,
Boogey. He was even featured by
Reminisce on his Alaga Ibile album for the track ‘Hurricane ‘ .
DOWNLOAD HERE [Download]
Share