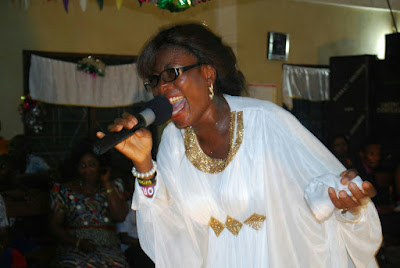 Sylvia Amponsah Bosompem fondly called in the music industry as OBAAKU PAPAPAA was born on 30th November, 1982 to Chief inspector P.A.K Bosompem and Anna Achiaa Sarfo. She hails from Adansi-Akrofuom(Amankyem) in the Asanti Region.
She began her basic education at St Theresas’ Roman Girls’ School, Essikado, Sekondi -Takoradi. She proceeded to Effiduase Methodist Basic School, completed in 1998. She gained admission into Odorgonno Senior High School (Great OSSA – “Moko Be”) in 1999 and completed in 2001. Right after her secondary education, she gained admission into St. Monica’s Training College in 2002 where she became the College Prefect(Senior Student) for the 2004/2005 academic year and completed in 2005. She respectively offered Diploma In Basic Education and Degree in University of Cape Coast and University of Education, Winneba in 2009 and 2011. She now holds B.Ed Mathematics as a teacher. She teaches Mathematics in one of the schools in the Kumasi Metro.
She is single but has a lovely daughter called, Nana Afia Antwiwaa Frimpong (Dr. NAAF). She started her musical career in 1999 and has three albums to her credit. The first album she released in 2009 has the title “Madi Nkunim” but promoted the track “Ayikoo”. She released her second album entitled “Nyame Were Mfirii Wo” in 2012 and is now out with the latest album entitled, “HAKUNA MATATA” which simply means “No Worries”or “No Problems”. She says looking at the price Jesus Christ came to pay, He admonishes us not to worry about anything and therefore the Swahili phrase, “Hakuna Matata”.She has a passion for her ministry and looks forward spread the gospel to the ends of the world through her musical career