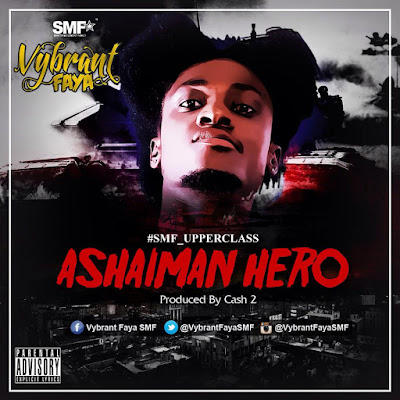 THIRD SOLO SINGLE” Vybrant faya has release his third solo single exactly one month today after the release of budum budum. The smf sign dancehall artiste promised fans during his budum budum radio tour a continues hit releases till December..The motion visuals of budum budum was completed over the weekend with Ghanaian based south african director Steve gyamfi of rheal films..The new single titled Ashaiman Hero is a complete club banger dedicated to youth in ashaiman striving for better life and an encouraging full pack rundown of everyday life struggles in the slum suburb of tema metropolis Ashaiman..Produced by Cash 2 ashaiman hero is definately a upperclass cut from vybrant faya..Vybrant faya is also scheduled to release his first collaboration next month featuring one of ghanas most upperclass prestige female artiste whos name was reserved for a surprise..The future is brigther than the silver lining vybrant faya said,the road is not for the swift so let see those who will endure to the end and hold the ultimate crown of victory..LoLoLoLo..