August 14, 2015 BREAKING NEWS, NEWS Comments Off on President Mahama Reveals ‘Baafira’ As His Song Of The Moment – READ MORE 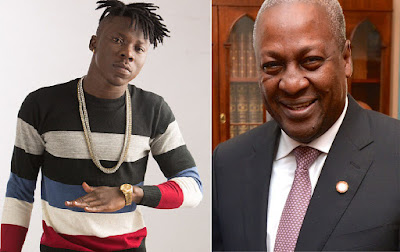 President John Dramani Mahama has revealed that his favourite song of the moment is Stonebwoy’s ‘Baafira’ featuring Sarkodie.

According to the President, Ghanaian music is doing very well and the young ones are taking the music to the international world. He mentioned ‘Sheekena’ and ‘Baafira’ as his favourite songs from 2015 BET Awards winner and reigning VGMA Artiste of the Year, Stonebwoy.

The President who was speaking in an interview with Uniiq FM in Accra on Wednesday to mark International Youth Day said: “I like a lot of the old artistes. Of course Kojo Antwi continues to be my favourite. I like Gyedu Blay-Ambolley, KK Kabobo. I like the young ones too. I listen to some of the old young ones like Shasha Marley, Wutah, VIP. But recently I listen to Stonebwoy, I think he’s got a good hit with Sheekena and Baafira. That’s also a good one. I like Ghanaian music so I listen to most our artistes.”

“We must look for a fair balance in terms of local and foreign music,” he stated.