Young So Announces “Ask Me Why” Release

July 30, 2015 ENTERTAINMENT NEWS, NEWS Comments Off on Young So Announces “Ask Me Why” Release 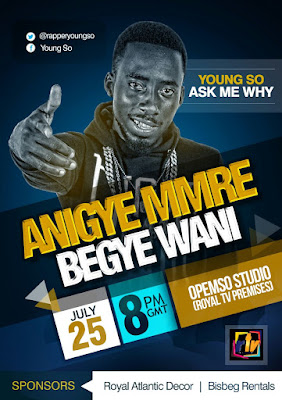 Having life after his road accident with Ghana Police Patrol Car last week, Young So has announced his most expected hopefully track off his album “Happy Day “ under Young So Music as a single and it will be premiere on Royal Television this Saturday. According to Young So, who until recently a signee of Gentlemenradio Records made known he realized the need to be himself and release songs he could easily refer to as ‘Ask Me Why’ comes up a direct questions to Ghana and Nigeria super stars like Shatta Wale, Natural face, Samini, Yvonne Nelson, Lydia Forson, Wizkid, Nadia Buari, Genevieve, Tonto Dikeh, Omotola, Iyanya, Timaya. The fastest advancing artiste, who is well known for his song “T3nt3l3but33l3 and Ahuofe Patri” looks upon his pending song ‘Ask Me Why’ in great direction to bring back the vibrancy in Oseikrom music circus. Oseikrom stand up – Said Young So .