Stonebwoy Signed As Brand Ambassador For KIA After Rejecting $80,000 From GLO – READ MORE

July 17, 2015 ENTERTAINMENT NEWS, NEWS Comments Off on Stonebwoy Signed As Brand Ambassador For KIA After Rejecting $80,000 From GLO – READ MORE 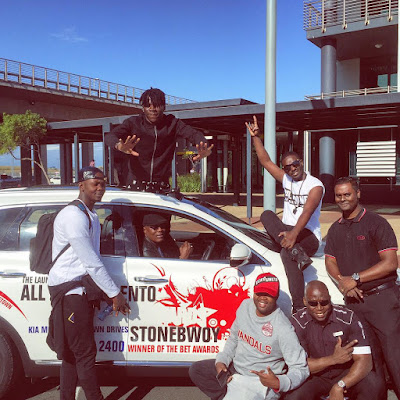 Multiple Awards winning Ghanaian Afro-Dancehall artiste who is now the new face of Ghanaian music to the world, Stonebwoy is indeed on top of his game at the moment.

After winning the ultimate 2015 VGMA “Artiste of the year” award earlier this year, the Bhim Nation CEO has not looked back. He went head to win the “Best International Act-Africa” award at the 2015 BET Awards and it appears all other opportunities due a music super star is befalling him.

He was recently in the news for allegedly rejecting a brand ambassadorial deal worth $80,000 from GLO and if his new post on his official Instagram page is anything to go by, then he must have landed a new endoursement deal with car brand KIA.

The “Baafira” hitmaker shared on his Instagram page that he has just been signed on as an ambassador by KIA.

Stonebwoy did not really give details about the deal but he revealed that he has received a customized unreleased KIA Sorento car in which he was picked up with in South Africa upon arrival in Durban.

Stonebwoy is currently in South Africa as a nominee for the 2015 MTV Africa Music Awards (MAMAs) and he is also set to perform on the same award scheduled to hold at the Durban International Convention Centre (ICC), KwaZulu-Natal-South Africa this Saturday July 18, 2015.