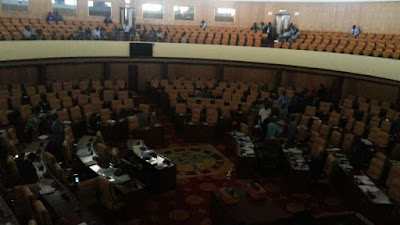 Parliament has been forced to suspend its sitting for a while after the legislature was hit with a power cut Wednesday.

“The MPs were in the thick of affairs considering various loan agreements the country has entered into with some international organisations when the incident happened.

“The Minority who are not enthused about the situation have protested saying “upon all the loans, President Mahama cannot fix dumsor”.

“The members are using their mobile phone torch light systems to aid their reading of the day’s Order Paper and other official documents which has been laid before the House for consideration and adoption.

“Members have now resigned to their seats chatting with one another.”