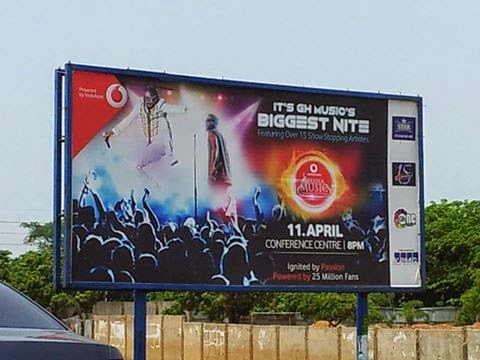 Yesterday, Charter House-organisers of  the annual Ghana Music Awards were compelled by Ghanaian musician-Sarkodie, his fans and the many Ghanaian bloggers who jumped on the issue of the company’s usage of the artiste’s name as a performing act in this year’s Ghana Music Awards without his consent or any contract.
I commented on this yesterday—and explained the legal position and implication of such actions. In my comment, I stated among other things that; “Charter House’s usage of his [Sarkodie] name in their commercial when they had not paid or hired him for such a performance breaches both his statutory right of publicity and his common law invasion of privacy right.

It’s interesting how this is playing out on twitter—if it was in the United States or United Kingdom, the artiste would be in court, seeking for the appropriate damages. If a big event company such as Charter House does not really give a hoot about what the law says at any point in time, what do you expect the smaller event organisers to do—and more also, are they not the same organisation in court seeking to have the law in action in relation to the Shatta Wale’s defamation case?
That is the sort of irony grounded in the way Charter House seems to be operating.
There is law to enforce when someone violates one in relation to them but they seem to continue to violate the same law (in other form) when dealing with others.
All around the world, the law is pretty simple on this; “a person shall not use any aspect of an individual’s persona for a commercial purpose…The person’s persona could include his or her name, voice, signature, photograph, image, likeness, or distinctive appearance, if any of these aspects have commercial value”.
Later in the day, Charter House issued a carefully put together press release to apologize to Sarkodie and his fans, calling what has happened a mistake—but it seems they LIED in their press release about this so called mistake.
In their apology press release, Charter House said;
“We would like to expressly state that Sarkodie IS NOT performing at the 16TH VODAFONE GHANA MUSIC AWARDS. Prior to this, we had been communicating and had met with a member of his management team trying to arrive at a favourable figure.
In anticipation of that figure coupled with the unstable power situation in the country plus the long Easter weekend ahead of us, where it would be almost impossible to get a studio to record, we worked ahead and recorded different versions of the 16th VGMA’s final event radio commercial.
One with Sarkodie’s name and another without. With our fingers crossed, the ads were all submitted to our media manager. Unfortunately, we were unable to come to a favourable agreement and parted ways amicably.
Our media manager was immediately informed on Thursday evening to send out only the ad that DID NOT HAVE Sarkodie’s name. This, she did except for YFM, where she sent the wrong ad which had Sarkodie’s name.
Clearly, it was an error from our end which we have totally admitted. We hereby unreservedly apologise to Sarkodie, his management friends and fans as well”
You can see from the part I have ‘bolded’ that Charter House seem to suggest that they honestly erred with the audio commercial by sending out a wrong one, and not that they had a clear intention to infringe on Sarkodie’s personality right, but from the billboard above—their explanation falls flat on its face.
Looking at the billboard, it shows images of Sarkodie and Samini performing and as such, there should not be arguments such as the two having been used on the billboard as nominees for the awards publicity—the obvious inference or message the billboard sends is that; the two will be performing at the Ghana Music Awards 2015.
I am not sure if there is an implied agreement that whoever is nominated for Ghana Music Awards gives the organisers some sort of image right, enabling them to use his/her name or image for the event’s publicity. But even if such an agreement exists, I think we can distinguish what we see on this billboard which is ‘performing acts’ on the night from any other which may just be photos of nominees—purely for the event’s publicity.
Again, fans of Sarkodie who heard the radio commercials or have seen any of the above billboards and have proceeded to buy tickets, on the grounds that Sarkodie has been booked to perform have also been legally wronged. Of course no one is going to sue or even ask for a refund, but this a clear case of misrepresentation.
Maybe Charter House erred with their apology too—and they need to re-apologies to Sarkodie and the fans for the fact that billboards were also mounted without the artiste’s consent.
More importantly, Charter House is not a gutter company so they don’t need to be doing some of these things—at least not with their main event.