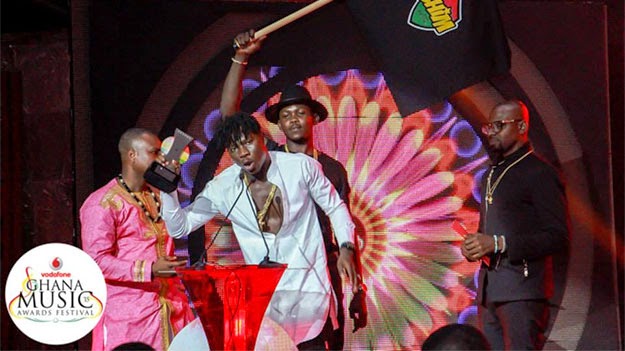 It was a night of total glitz and glamour as the 16th edition of the biggest music award show, Vodafone Ghana music award, ignited by passion and powered by over 25 million fans came off on the11th April, 2015 at the Accra international conference center.

The concert tagged home of the stars over the years saw numerous celebrities from all walks of life including renowned dignitaries, honourable ministers, television and radio personalities, movie icons, veteran musician and music enthusiasts converged and filled the auditorium to witness the event.

The show officially started with an opening live band performance by Wiyala.

Known as “The Lords”, Joey B and Pappy Kojo took their turn as they perform “Wave” and “realer no”. The Volta regime originator, Edem dazzled patrons as he performed “the one” and “koene”. All the way from Nigeria, Yemi Alade thrilled audience as she performed her hit single “Johnny”. There were also some surprise performances from “Tic Tac” and “Tinny”, dishing out some old tunes of their past records.

Other big acts including Daddy Lumba, Samini, Patoranking and Bhim Nation crooner Stonebwoy gave a spectacular performance to the delight of their fans.

Ashaiman based afro dancehall artiste, Stonebwoy was crowned with the most enviable title of “Artiste of the year” as well as dancehall and reggae artiste and song of the year. The “Baafira” composer was overwhelmed and full of joy for the love and support from his fans and charter house.