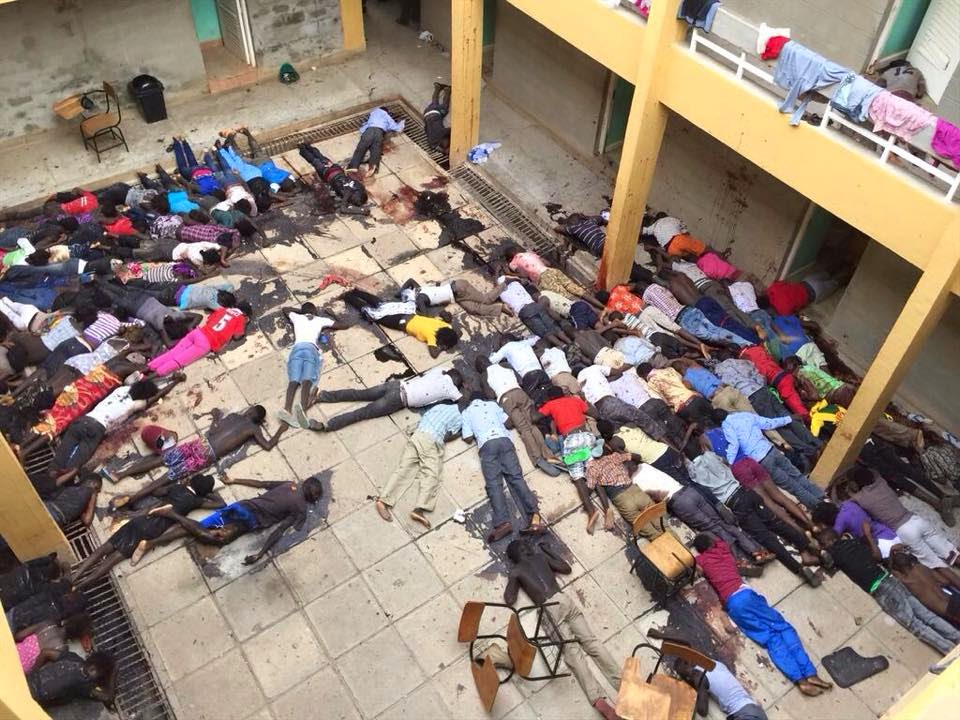 Up to 150 people have been murdered by masked al-Shabaab terrorists who stormed a Kenyan university and shot and beheaded Christians in the worst attack in the country in 17 years.
The group raided the Garissa University College campus shortly after 5am local time yesterday, overwhelming guards and murdering people they suspected of being a Christian.
The death toll rose to 147 last night and the 13-hour siege ended. A total of 79 were injured and 587 were led to safety.
Most of those killed were students but two police officers, one soldier and two watchmen are among the dead.

Kenyan security officials said one of the terrorists was arrested after he tried to escape the compound.
They have also offered a £145,000 bounty for Mohammed Mohamud, known as Dulyadin, alias Gamadhere, who they suspect of masterminding the attack.
Kenyan intelligence officials believe that Mohamud is in charge of al-Shabaab’s external operations against the country.
He is believed to have spent time teaching in a hard-line madrassa before becoming a senior member of the Somali terror organisation.
He claimed responsiblity for an earlier attack in Makka, Kenya on November 22, 2014, when 28 people were murdered.
Kenyan police chief Joseph Boinet announced that a curfew had been introduced from dusk to dawn – 6.30pm to 6.30am – for four regions near the Somalia border as a security precaution.
Student Omar Ibrahim told News24 Kenya: ‘I was in a group that was saved by the KDF (Kenya Defence Forces) just after 1pm.
‘We saw many many bodies, some did not have heads. I don’t know why someone would do such a thing.’
Eye-witness Collins Wetangula, the vice chairman of the student union, said he was preparing to take a shower when he heard gunshots coming from Tana dorm, which is home to both men and women, 150 yards away.
The campus has six dormitories and at least 887 students, he said.