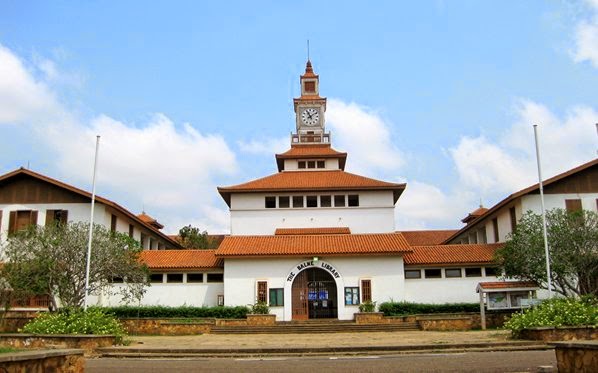 Two weeks ago, I walked into the bindery of the University of Ghana for the hardcover binding of my final MA dissertation before submission. The bindery, located at the Balme Library of the University, is where thousands of students bind their final dissertation and thesis. They also undertake commercial binding of newspapers and books from people all over the country. But it appears a chunk of the money generated goes into private pockets as customers are made to pay up to three times the normal cost of binding.
Before I went through the process of having my work bound, I suspected foul play from the old man I met at the bindery. He gave his name as Mr. Baidoo but some of his colleagues also referred to him as Yaw.
I got there on Thursday February 26, 2015 at about 4:45pm, and he told me I could get my work the following day or three days later depending on whether I wanted the normal procedure or express service. The normal charge, according to Mr. Baidoo, was GHc20 while the express service was GHc25. I became suspicious when he demanded part payment with the excuse that he wanted to use the money to buy materials for my work. The University of Ghana owns the facility and he worked with the machines and materials there.
I refused to give him any money. I told him I would pay and take a receipt when I returned the following day.
“What do you need a receipt for?” he asked. “Who are you going to give it to?” he added.
I told him I needed it for myself and was convinced at this point that he was about perpetuate an act of corruption.
Trusting my instinct, I returned to the Balme Library with a secret recorder when I was going to pick up the work.
Mr. Baidoo wanted me to notify him before getting to the Balme Library, but I went there without calling him in advance. When he came to the reception area a few minutes after my arrival, he handed me three copies of the neatly bound dissertation. He had added a way-side receipt because I had told him the previous day that I would not pay any money unless I was given one. I rejected that receipt and demanded an official receipt from the University of Ghana.
When I insisted on the official receipt for payment, Mr. Baidoo wanted to strike a deal with me. He was prepared to make me pay less without a receipt. I rejected the offer. He consulted one of his colleagues, a woman; who tried to convince me to pay without collecting a receipt. I pointed to a notice that said customers should not pay any money without collecting a receipt.
When I insisted I was not going to part ways with a pesewa without an official receipt, they issued me with an official receipt and I paid seventy-five Ghana cedis for the three copies.
I later discovered to my surprise that the official charge for the work was 15 cedis and not 25 cedis per copy. I was told that there was nothing like express service at the bindery. With this information, I confronted Mr. Baidoo.
Again, Mr. Baidoo enlisted the services of two of his female colleagues who tried to explain to me why I had paid so much. Their explanation did not make sense to me so I demanded to see the head of the bindery unit and I was introduced to one Mr. Odjeawo. He summoned Mr. Baidoo to his office and asked him why he charged me more than the approved fee and did not want to give me a receipt.
After fumbling and incoherently trying to explain, he finally admitted his wrongdoing. His boss, Mr. Odjeawo said it was illegal to charge for express services because there was no such service approved by the department. He ordered Mr. Baidoo to refund my balance of GHc30. Mr. Baidoo pleaded that he didn’t have the money at that time and suggested I come later for the money, but was ordered to go and borrow from his colleagues and pay me.
I got my balance of GHc30 back. This was because I was not prepared to cooperate with him but I realized I was not the only one who was duped. I discovered all my course mates who had submitted their works had paid without taking receipts. I also discovered that some paid more than I did. Andrew Nantogma said he paid GHc30 per copy instead of the GHc15 because he was told that the normal service and charge could take up to two weeks to get his work. He needed to meet the deadline so he had no option.
Audrey Maasodong said she paid GHc25 per copy but she was not given a receipt.
Philip Dornyo paid GHc105 cedis for the three copies instead of GHc45. He went there when the Teachers and Education Workers Union (TEWU) was on strike. But he was given the number of one George who worked at the bindery. He said George met him around Kisieman and took the work and took it to the University of Ghana bindery to bind.
Interestingly, there is a notice at the University of Ghana’s bindery asking customers to pay only at approved payment points and to demand receipts but the customers; mainly Masters, Mphil and PhD students, get duped and do not even collect their receipts. This does not only rob the University of Ghana of income, but patrons of the services at the bindery pay about twice or thrice more than they are supposed to.
The writer, Manasseh Azure Awuni, is a Senior Broadcast Journalist with Joy 99.7 FM. His email address is azureachebe2@yahoo.com
SHARE THIS STORY