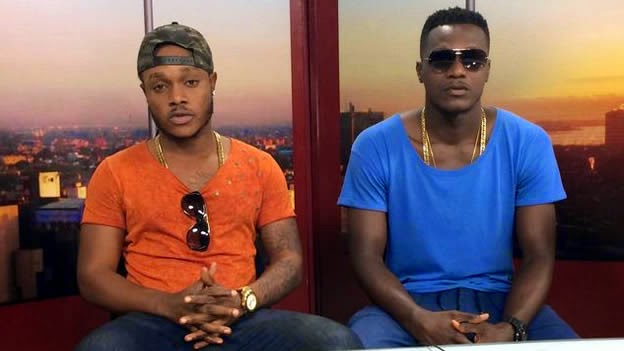 Keche performed at Green FM’s concert just past this weekend, their stage execution caught my eyes as they did exceptionally well so I decided to have a quick one on one interaction with the duo.

Well during the conversation, the group somehow fired stray shots based on their observation that the groups fans are not only Accra based like the ‘others’. Making me wonder exactly who the ‘others’ they referring to.

They also talked about the VGMA’s, picked their favorite for artiste of the year and checkout what they had to say about the ‘best Group Of the year’ category.

Here’s the full interview; full detail of what they had to say about what’s been going on with them and their plans for this year.

Q: Tell us about your recent performances.
Keche: Since last year we’ve had the opportunity to perform at various shows like ‘The Versatile show, December To Remember (just to mention a few) which has really widened our scoop as a group. One unique thing we noticed during shows in other parts of the region is that ‘’our fans are not only Accra based like the other’s’’. We have been to all the corners of the country from Northern, Eastern, Western and Southern parts. We really do appreciate the fans cos they always jam to our songs when we on stage.

Q: What’s new with Keche?
K: The good Lord has been very kind to us especially with our new management team George Britton and the #SkillTeam, the journey hasn’t been easy so we have decided to thank and praise him with our first ever gospel song titled ‘In His Time’. The single is also to give fans something to praise the Almighty God with. We even have a highlife song that will be released somewhere by ending of March, track was produced by Mix Masta Garzy titled ‘Shame On You’.

Q: Any Upcoming Collabo’s?
K: Yes, we already have recorded collabo’s with Sarkodie, Edem and the rest will be a surprise package on our upcoming album slated for July-August so watch out.

Q: When is the ‘Diabetes’ video coming out?
K: Production wise the video has been shot we just have to pick a date to put it out there for our fans. The video was directed by Prince Dovlo.

Q: What Do You think about the GMA’s & any favorite in the ‘Artiste of the Year’ category?
K: Well, it is always a good thing to see an artiste being rewarded for the hard-work they put in over the years. As for who will win ‘Artiste of the year’, that’s a tricky one cos we think each act nominated in that category did exceptionally well but from our personal view we think Stonebwoy should be crowned.

Q: Your view on this years’ ‘’Best Group of the Year’’ category?
K: To us there shouldn’t have been a category for that in this year’s VGMA…lol, but on a more serious note we feel the sensation for groups have not been as it used to be. When you cast your mind a couple of years back you will understand what we trying to say. We hope this year will be different and we wish all of them good luck.

Q: What should fans expect from Keche this year?
K: Our album straight up! Keche is coming out in a whole different level, we have all kinds of genre on this album from Afro-pop to Hiplife to Gospel to Highlife to Hiphop and even Dancehall.