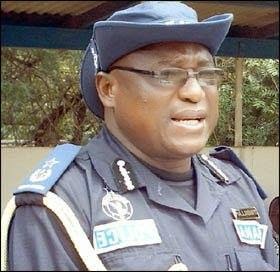 The Director General of Police Human Resource and Administration COP Patrick Timbilla has been interdicted and put under house arrest in connection with the massive police recruitment fraud that hit the country.
The interdiction was confirmed to Joy News’ Evans Mensah in an exclusive interview with the Police Public Affairs Director DCOP David Ampah Benin.
According to him a special task force set up to investigate the fraud recommended that Timbilla be interdicted.
With that recommendation “He [Timbilla] is not supposed to move out from his house because he is likely to interfere in the investigation” Ampah -Benin said.
He stated further that Timbilla was implicated by some of the victims in the biggest recruitment fraud.
The Task force has evidence of text messages and other correspondence between victims of the fraud and the implicated Timbilla, he added.
Timbilla is just a rank away from occupying the highest position in the police hierarchy.
How it started
Last week over 200 people trooped to five regional police training schools with admission letters hoping to begin training as police recruits.
It turned out however that the letters were fraudulent with fictitious signatures.
Some of the victims were later arrested. Incidentally COP Timbilla held a press conference chiding the victims for using unapproved means to enter into the police administration.
COP Patrick Timbilla
He said recruitment into the police service is not like buying groundnut by the roadside, charging prospective police recruits to use the appropriate procedures to enter the service.
“Every police officer found to have been involved in the police recruitment scam will not be shielded ” COP Patrick Timbillah said.
True to his promise five suspects were arrested in connection with the fraud, two of them were police men.
In a shocking twist to a fraudulent tale, COP Timbilla was later to be arrested and put under house arrest over the same matter.
Ampah-Benin said the administration is shocked at the turn of events. He was quick to add though that the key suspect has denied culpability in the scandal.
Investigations continue.