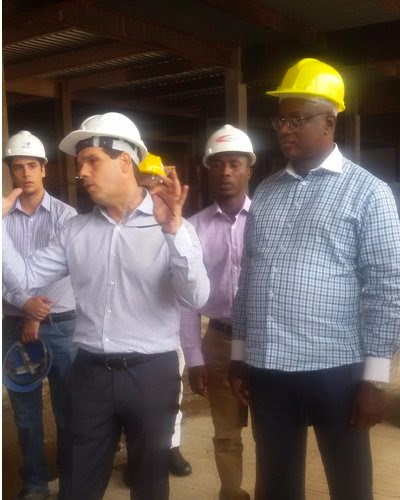 Equipment for Kejetia-Central Market redevelopment set to arrive in April
Equipment and materials for the redevelopment of the Kejetia Central Market is set to arrive in Ghana from Brazil by the first week of April, 2015.
The 80 feet container comprising steels for pillars, columns, scaffold and other materials is already on its way.
Chief Executive Officer for the company in charge of the project, Fabio Kamal said his outfit has completed arrangement for the project take off.
He said since 2010 his outfit has been working closely with local engineers and other relevant bodies before Parliament approved funds for the project last year.
Mr. Kamal said though his outfit is following the recent agitation by some traders, his team is more resolute in its attempt to get the job done.
He revealed more than 175 million dollars out of 300 million loan facility for the project has been released to them.
Some traders and shop owners at Kejetia have kicked against the project as they accuse the city mayor among other things of championing his selfish interest.
The traders have questioned the inclusion of the terminal in the project.
City authorities on the other hand believes the perennial fire outbreak in Kumasi markets and other challenges cannot be solved without the total development of the market and the terminal.
A team of stakeholders delegation including three NPP MPs were last week sponsored by the Brazilian company to the South American country to familiarize themselves with prototype projects and make possible inputs.
Mr. Kamal in his farewell address to the delegation at Rio de Jeinero in Brazil expressed his excitement with the delegation’s visit.
He indicated the sponsored visit reaffirmed his company’s confidence in the success of the project.
Meanwhile the city mayor, Kojo Bonsu is optimistic few agitated traders will soon reason with authorities for immediate take as serious discussion is on-going their leaders.
He expressed his appreciation to Ashanti NPP caucus for their endorsement for the project.
The 13 member delegation led by KMA boss, Kojo Bonsu ended their tour on Sunday 22nd March 22, 2015 and expected to be in Ghana on Tuesday.