February 12, 2015 ENTERTAINMENT NEWS, NEWS Comments Off on Never Allow My Son in Your Studios-Sarkodie’S Mum-Read Why 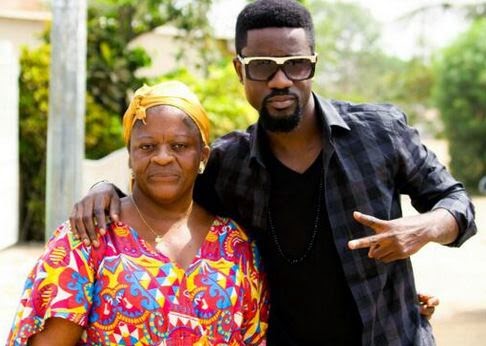 It has been established that sarkodie’s mum at a point in time was also one of the dream killers Sarkodie had to deal with when he started his music journey. If a tweet by Pharuk Jbreal, the artiste behind ‘pressure” a song that is quickly becoming a street anthem in Ghana is anything to go by, then indeed Sarkodie had been through a lot before he hit the limelight. The tweet disclosed how Sarkodie’s mum went to Nana Fynn’s studio to warn him not to allow her son (Sarkodie) to his studio. A lot of musicians can related to this situation and will attest to the fact that family can be one of the biggest challenges that confronts an upcoming musician. When Pharuk Jbreal was contacted to elaborate on the tweet, he explained that he decided to share that experience to inspire people with dreams to be reasonably stubborn for their dreams and follow Sarkodie’s shining example. He further affirm that sarkodie’s mum made it clear to Nana Fynn that music is taking sarkodie’s attention from his education and that she was worried. “I happen to know Sarkodie before he became a big star and even have a songs with him, he hasn’t change in terms of character, he is not into drugs and lives quiet a decent life. It is obvious that his mum is proud of what her son has turned out to be. I have seen her at some of his events and it says it all. I can understand his mothers concerns at that time, there are quiet some disturbing stories about musicians out there and as a mother you can only be vigilant and look out for your child. Am sure sarkodie will one day get a degree or even go beyond that, education is not a race” Pharuk Jbreal said. Pharuk Jbreal who was formally known as Ruky is making a comeback to music after dropping the mic to pursue some corporate ambitions. He found himself in the energy sector and later proceeded to head a multinational company. “I was on the last chapter of my yet to be launched book called Your Passion Your Paycheck, when the inspiration came for me to get back to what i love, which is music. Sarkodie has also been quiet instrumental for my comeback. Anytime we meet, he makes it a point to encourage me to come back to music because he feels my creative ability is amazing” Pharuk Jbreal added He also revealed that he will use his music to support developmental issues such as Youth in Agriculture and Zongo communities’ empowerment.
Source -GeorgeBritton