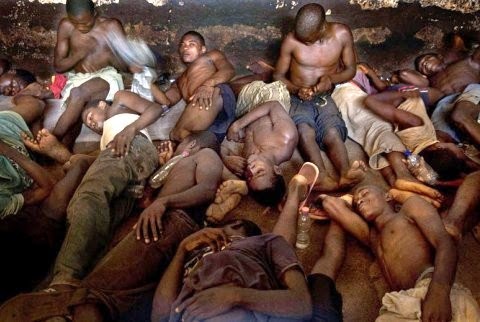 Two inmates at the Kumasi Central Prison have been confirmed dead, while five security officers sustained severe injuries following clashes last night at the detention centre. Also calm has been restored and the area cordoned off, according Luv News’ Erastus Asare Donkor on Thursday. Prison inmates attempted to break jail after fire broke out at the facility yesterday, but they were quelled by 200-man security force. The prison inmates had been evacuated from their cells after the fire outbreak hit a section of the detention center Wednesday evening.
Heavily armed police and military personnel responded to the prison break attempts fiercely with tear gas and guns, while the inmates threw bricks, stones, sachet water and other objects at them. It is unclear whether the inmates were killed by gunshots from the police personnel who were trying to keep the rioting prison inmates under control. Erastus said a huge prison van at facility at Thursday dawn suggest there is likely to be prison transfer.
posted by Dwomoh Bright
Source: Joy Online

Previous Jordan, Appiah to start in attack for Ghana against Equatorial Guinea
Next Akrobeto prays for Black Stars to be in unity in semi-final match-Watch Video