February 16, 2015 BREAKING NEWS, NEWS Comments Off on Dumsor (Dum-sɔ) Has been Added to Wikipedia-Read Why 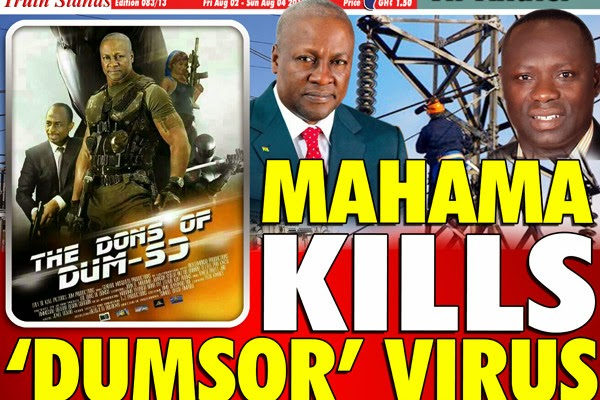 Dumsor (Dum-sɔ) is a popular Ghanaian term used to describe persistent electric power outages which has resulted due to the insufficient power production to meet the population growth of the country. Insufficient power supply means that load shedding is carried out daily by the Ghana Grid Company and Electricity Company of Ghana in Ghana.[1] The term started gaining prominence in 2009 when water levels in the Akosombo dam dropped. This made the Electricity Company of Ghana initiate a load shedding exercise due to insufficient power generation from Ghana’s main hydro electric dam. The load shedding exercise has continued since then and has plunged the country into a major power crisis.

The word has been used by the general public in expressing anger at and disappointment in authorities. It has also gained popularity via social media websites such as Twitter and Facebook with the hashtag #Dumsor. The term is a compound word generated from two Akan ( a language spoken largely in Ghana) words dum (to turn off or quench) and sɔ(to turn on or to light). In 2015, John Mahama used the word in a state visit toGermany while talking with Angela Merkel, he indicated he has been nicknamed “Mr. Dumsor” due to the power crisis, where he attributed it to Nigeria for not suplying gas as required to Ghana through the West Africa Gas Pipeline.

Previous Nigerian Actor,Hanks Anuku Says He intentionally Affected his Wife With HIV/AIDS-Read Why
Next RayJay-Thank You Baba