Breaking News
Home / BREAKING NEWS / Catholic Priest Says Homosexuality Is Gift From God, The Bible Is Not The Word Of God, -Read Why

Catholic Priest Says Homosexuality Is Gift From God, The Bible Is Not The Word Of God, -Read Why

February 17, 2015 BREAKING NEWS, NEWS Comments Off on Catholic Priest Says Homosexuality Is Gift From God, The Bible Is Not The Word Of God, -Read Why 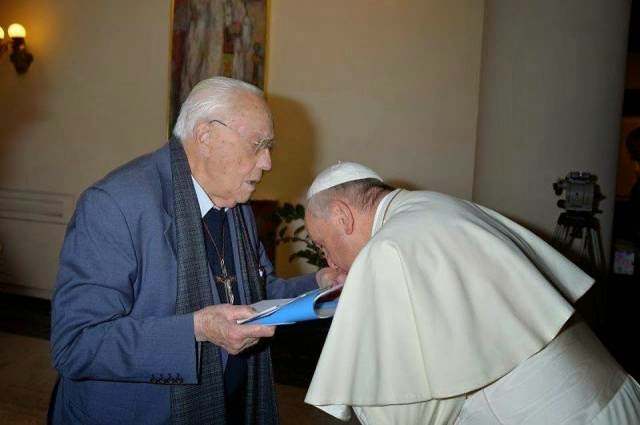 A 93 year old Italian priest named Michele de Paolis, considered to be Italy’s most rebellious priest and amongst the most universally notorious advocates for the Catholic Church to change its position on homosexuality, said:

homosexual love is a gift from (God) no less than heterosexual.

The Bible “is” not the word of God

And now, just a few days ago, Francis, whether by his own will or through some malicious advisors, celebrated mass with this evil man and then kissed his hand, as this photo attests:
According to one report:

Francis closed the meeting by kissing the priest’s hand, a gesture that the far-left newspaper L’immediato called one “revealing the humility of a great man to another of the same stature.”

The sodomite supporting priest, Paolis, described in his Facebook page how the meeting got organized: when requesting the meeting, he asked the Pope, “Is it possible?” Francis then responded, “Anything is possible. Talk to Cardinal Maradiaga and he shall prepare everything.” Paolis stated on his Facebook page, “And then (unbelievably) he kissed my hand! I hugged him and wept”.

Paolis is “a well-known figure in Italy as a leading clerical apologist for the homosexualist ideology.” How, then, could the Pope not know about this man’s evil behavior? How could he kiss his hand and do mass with such a reprobate?

This same sodomite priest openly condemns the Bible, saying that its not the Word of God, and illustrates the spirit of Antichrist. He wrote in a damned book:
W]e must overcome the letter of Scripture. It is the same St. Paul in 2 Corinthians 3:6 who says, “The letter kills, but the Spirit gives life.” … That this biblical letter.. killed and continues to kill, unfortunately, at times, not only morally but also physically, is a fact. The Bible “is” not the word of God; the Bible “contains” the word of God. …Instead of wasting energy in endless controversy the Church aims to build a Christian spirituality of joyous acceptance of self, gratitude to God in the knowledge that homosexual love is a gift from Him no less than heterosexual. A spirituality in which we dialogue and we compare to all, but obey God alone.

He moreover said that Christians:

completely ignore the phenomenon of homosexuality, which science has now clarified unequivocally: the homosexual orientation is not chosen freely by the person. The boy or girl will discover that it is an approach deeply rooted in personality, which is an essential aspect of his identity: it is not a disease, it is not a perversion. …Some church people say, “It’s okay to be gay, but they should not have sex, they can not love each other.” This is the greatest hypocrisy. It’s like saying to a plant that grows, “You must not flourish, you must not bear fruit!” …We must have patience with our Mother Church… Her attitude towards homosexuals will change.
There is a very dangerous homosexual supporting ring deeply entrenched in the Vatican, which is helping enable it when it conducts mass with such a depraved heretic.

I have myself experienced, to some measure, this homosexual supporting ring in the Catholic Church, in a conversation I had with one priest and Catholic canon law judge, named Robert L. Kincl (also known as Fr. Bob Kincl), who was ordained in Rome. Kincl had befriended us as a fan of Shoebat.com acting as conservative, yet referred to homosexual fondling as permissible in the conversation. Having been shocked at his remarks, I told Kincl:

How can you, as a priest, be so liberal toward such a sick evil as two men fondling each other, or as two men having a “relationship” just as long as they are not going with other men. It is evil and it is reprobate.

I also told him:

It is not tolerable for you, as both a priest and a canon law judge, to be permissive to somebody having a homosexual relationship just as long as they are not being promiscuous with other men. It is deplorable, and in the words of St. Paul, “worthy of death” (Romans 1:32).

Kincl defended his position and responded with a rejection of the Old Testament and a twisting of St. Paul’s condemnation of homosexuality in Romans, stating

We do not follow the Hebrew Scriptures. We follow Jesus Christ who never mentioned gay relationships. When St. Paul mentioned such a relationship he was referring to the promiscuousness of the Romans using sodomy.
Shoebat.com decided to investigate Kincl and found that he has a dark past. In 1993, Kincl worked as a Commander in charge of clergy at the U.S. Navy, and while he was in the service he defended another chaplain confirmed to be guilty of child molestation, named Robert Hrdlicka.

The investigation revealed that Robert L. Kincl had even written the authorities, not to charge the pedophile who molested the young boys, but urged them to send him back to serve as a chaplain:

Catholic chaplain Lt. Robert Hrdlicka pleaded guilty to molesting boys in 1993. Before his sentencing, six other Catholic Navy chaplains and the church’s archbishop for the military services urged authorities to send Lt. Hrdlicka to a church-run treatment center.

“It is my fervent hope and prayer that he will be able to return to the active ministry as soon as possible,” wrote then-Cmdr. Robert L. Kincl.

Instead, Lt. Hrdlicka went to prison.

Shoebat.com looked up Kincl’s My Life page, to find out that after all these years Kincl is still friends with Hrdlicka the pedophile, since he is on his friends list, of which I took snapshots: 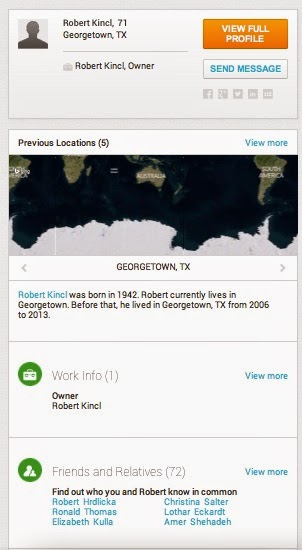 Kincl is now serving as a priest in Our Lady’s Maronite Catholic Church alongside Msgr. Don Sawyer. When I confronted Sawyer on Kincl, Sawyer vehemently defended Kincl. 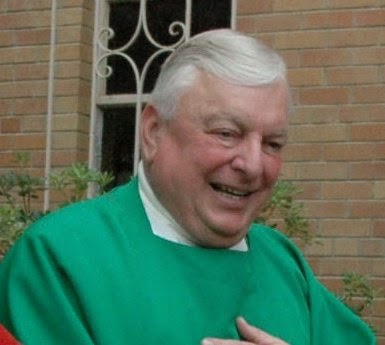 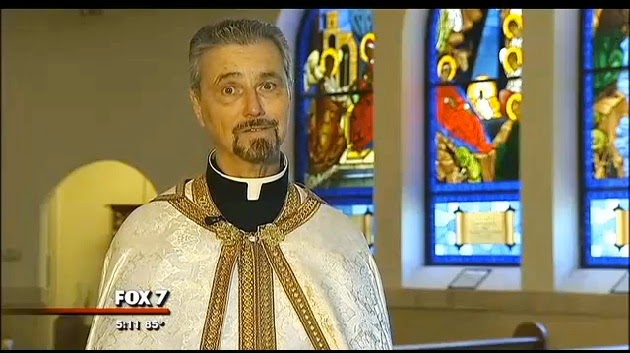 We asked them how could someone who supports homosexuality and defended a pedophile still be serving as a priest and not be excommunicated, to which Deacon Ron Walker, rolling his eyes, said that the Church’s main objective would be to reconcile him with God, and not excommunicate him.

It seems that the Diocese of Austin could care less if one of its priests supports homosexuality and defended a pedophile. 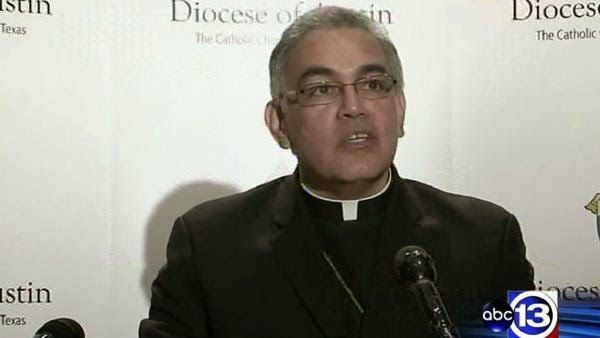 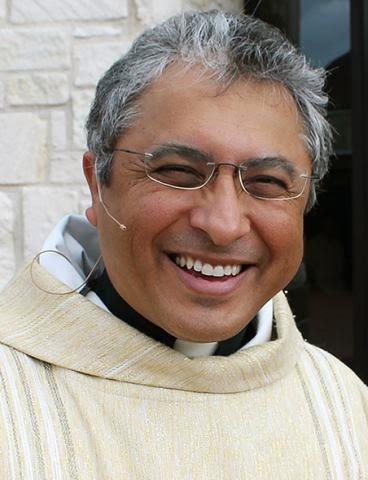 Vicar General Danny Garcia of the Diocese of Austin

Why is this man serving as a priest when the Catholic Church, in its teachings, forbids homosexuality?

It is not surprising to see how far reaching homosexuality has gone in the Vatican. What other deviancies will enter the Vatican in the next decade remains to be seen. Whatever happened to normal sin? In the good old days, steeling a chicken perhaps constituted such sin, but these days, its sleeping with it.

Christianity is not about sycophancy, its about war against evil and the devil. We must arm ourselves to fight in this war………… 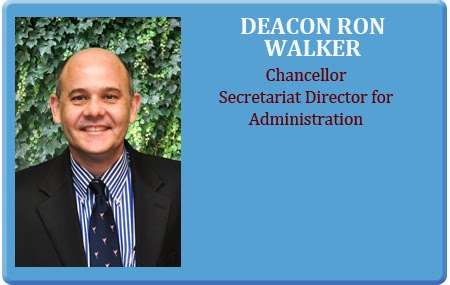