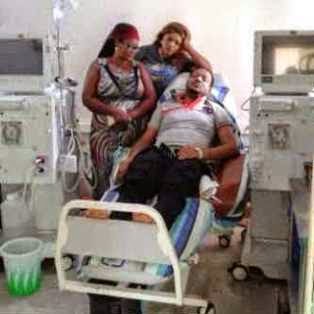 Talented Nollywood actor, Muna Obiekwe is dead. The actor, whose demise hit the movie industry like a shock wave yesterday, was said to have died of kidney failure in an undisclosed hospital in Lagos.

According to a source close to the actor, Muna has been battling renal related ailment but has kept it secret for a long time before informing the president of the Actors Guild of Nigeria, Ibinabo Fiberesima who has since been in touch with him. The source further stated that that actor’s drinking habit may not be unconnected to his death.
Until his death, the Enugu based actor was one of the controversial actors in the Nigerian movie industry dubbed Nollywood. Muna, who has a knack for acting romantic scenes, once came under attack for grabbing fellow actor, Biola Ige’s breast, in the movie, Pregnant Hawker. However, the actress later denied the story, claiming that the picture which went viral was doctored and that there was no such scene in the movie.
Muna on his own part was quoted to have said, “…I don’t remember the movie. I also don’t remember sucking Biola’s breasts. If the movie exists, that scene never took place.

“Like I told you, I don’t recall the movie. I do a lot of movies and I can’t remember what happens in all of them. The fact that I don’t recall means that the movie was shot a long time ago. Probably three or more years back. When love scene was in vogue with producers. I’m still searching for the movie to acquaint myself with the story.
“There has never been anything between myself and any actress that I’ve made a movie with. My romantic relationships have always been outside the movie industry. I don’t take my work home”.