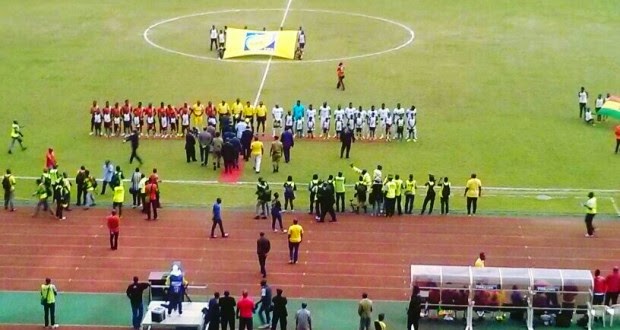 Ghana’s penultimate game of the 2015 African Cup of Nations qualifiers ended in defeat against the Cranes of Uganda in Kampala on Saturday.
A first half header from Savio Kabugo, his first goal for his country, saw the Ugandans inflict a first defeat of the qualifiers on the Black Stars.
David Accam came on in the second half  for his first competitive cap for Ghana while Razak Brimah was also handed his début in goal.
So did any of the players stake a claim for a place when regulars, Asamoah Gyan and Kwadwo Asamoah return to the team?
Here’s is how the Black Stars players rated against Uganda.
Razak Brimah (Goalkeeper) – 6
Should have done better for Uganda’s winner. His poor judgement of the corner meant the ball flew past him to Kabugo at the back post to head home. Had little to do besides. Held a couple of long range strikes comfortably but his early mistake will definitely be put under the spotlight in the post-match analysis.
Harrison Afful (Right-Back) – 5
Was left exposed on several times and was under constant threat from the Ugandans who sensed a weakness in that area of the field. His performance on Saturday was extremely surprising considering he has been one of the Black Stars most consistent performers in recent times. Was limited in attack as well.
John Boye (Centre-Back) – 6
Looked shaky in the opening moments of the game. And being part of the defence that conceded in the 10th minute of the game wouldn’t have helped his confidence.
He recovered to put in some crucial tackles as Uganda looked to kill off the game in the second-half.
Jonathan Mensah (Centre-Back) – 5
Had an unimpressive game beside John Boye. Managed a few clearances but gave away too many soft fouls. Almost gifted Uganda a goal with a back-heel that almost let them in. Will be looking to improve against Togo.
Baba Rahman (Left-Back) – 6
One of the better performers in the Black Stars. Was always an option on the left and caused a few problems for the Ugandans. Defended very well for most of the game. Looks to have nailed down the left-back spot in the squad.
Ebenezer Afriyie-Acquah (Midfielder) – 4
Was unconvincing until he was hauled off for Solomon Asante in the second half. was given the run around in the centre of midfield by the Ugandans and failed to break up play enough. Don’t expect him to start against Togo.
Rabiu Mohammed (Midfielder) – 6
Was effective without being spectacular. Worked tirelessly in midfield as always and would probably largely escape any criticism of the team’s performance on Saturday.
Emmanuel Agyeman Badu (Midfielder) – 4
Drafted into the hole behind the striker, this most attacking of defensive midfielders was expected to shine. However all he had to show was a few wayward shots. Badu remains a key player for the Black Stars but will need to improve significantly if he wants that to remain the case for much longer.
Christian Atsu (Midfielder) – 4
His lack of game time at Everton might be affecting his match fitness as he struggled to impose himself on the game. He had a few runs and dribbles and one shot late in the first half after he cut in on his from the right side which was easily held, Ghana’s first shot in target in the game. But was well marshalled by the Ugandan defence overall.
Andre Ayew (Midfielder) – 5
Not the best of games for this very talented player. The added responsibility of donning the captain’s armband for the first time in Gyan’s absence might have been a factor in Ayew’s unconvincing display. he gave the ball away several times and struggled to beat players when he took them on. Was wasted out on the left and was rightly replaced in the second half.
Majeed Waris (Striker) – 6
Waris started up front on his own in the absence of Gyan. He worked hard all game and had a goodchance he created for himself after winning the ball in midfield in the second half. Was isolated more large portions of the game and was not helped by the long balls which were lumped up to him as he was beaten to virtually every ball by the taller Ugandan defence.
Substitutes:
Solomon Asante (Midfielder) – 7
Was a constant threat on the right hand side when he came on in the second half, causing problems to the Ugandan defence with wonderful deliveries. Made a strong case for a start against Togo with this performance off the bench.
David Accam (Striker) – 6
Came on for his debut and almost got an equaliser with virtually his first touch, meeting a Solomon Asante cross on the half volley which was clawed out by the Ugandan keeper. Very bright cameo from the young striker.
Mubarak Wakaso (Midfielder) – 6
Came on for Andre Ayew late in the game and immediately won a free-kick which he struck over the bar. Didn’t have time to impose himself on the game.
Maxwell Konadu (Coach) – 6
On hindsight, his decision to play Agyeman Badu in the hole and Andre Ayew on the left will probably be seen as a bad one, but it was a viable option before kick-off. Was slow to make changes to the team’s play in the second half, but when he did, they improved greatly. His decisions will be analysed based on the result but made some tough choices which ultimately didn’t pay off.
By: Edwin Kwakofi/citifmonline