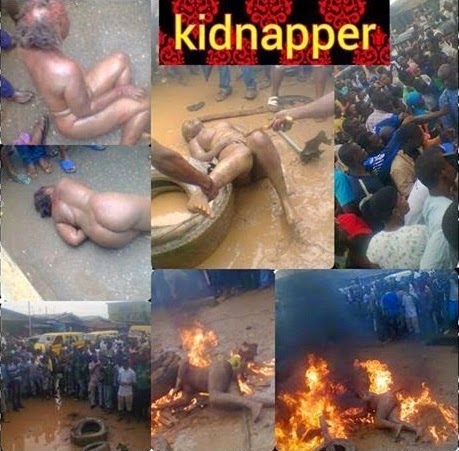 The pics from this scene is so gory. The woman pictured above was accused of attempting to kidnap three primary school pupils in the Ekoro area of Abule-Egba, Lagos. Eye-witnesses claim the woman stopped the kids, who were aged 7-10 years as they were going to school, and asked to take them to school.Then a female hawker in the area, suspecting the woman was up to no good, alerted others in the area who then surrounded the woman and started asking her questions.They say the woman claimed they were her children but couldn’t give their names and the direction she was taking them wasn’t where their school was…plus the children said they didn’t know her and before anyone could stop it, they descended on the woman. Beating her to a stupor and then setting her ablaze.