SHOCKING: 40 Perish As Another Gold Mining Pit Caves In

November 21, 2014 BREAKING NEWS Comments Off on SHOCKING: 40 Perish As Another Gold Mining Pit Caves In 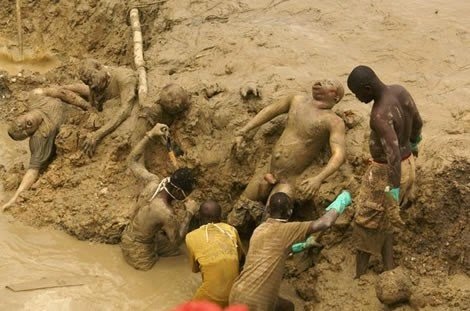 40 people mining without licenses in the Ghanaian town of Tiagbani are reported to have been trapped in the pit they were mining in.

According to PeaceFm, seven [7] of the unlicensed local miners were pulled out of the pit but died shortly afterwards. Another 33 are believed to be still trapped underground.

The bodies of the those pulled out of the pit have been deposited at the district hospital for autopsy.

“They went to operate at their site but unfortunately the pit caved in on them. Rescuers are doing their best to dig out the dead bodies but at the moment the whole township is mourning,” the reporter for the radio station said.

Tiagbani is in the Talensi-Nabdam district of the Upper East Region, far from the traditionally-known gold mining sites in Ghana.
Source 233 prime