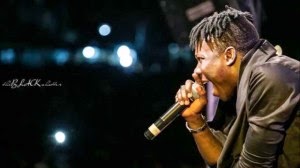 On the Stage of Ghana Meets UK Dancehall Clash in the stadium, Stonebwoy diss Shatta Wale and his Nima Fans calling Them Illiterates for supporting Shatta Wale to perform morethan the scheduled time given. Hence, Came on stage and say a whole lot of things about the Dancehall King and his Nima, Newtown, Korlegono fans. Stonebwoy added that, he will not lead his people from Ashaiman to misbehave like that.
Have a listen below..