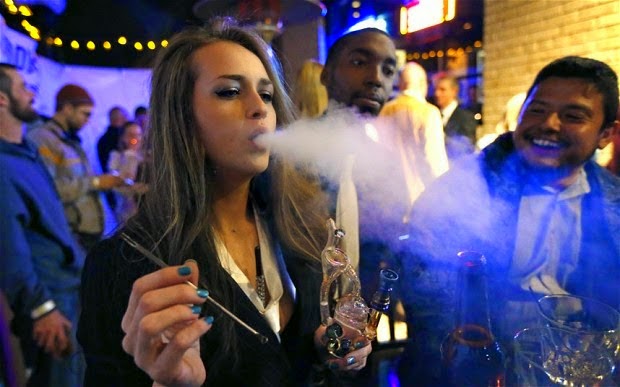 Here’s what you can and can’t do.
Washington DC has voted overwhelmingly to legalise marijuana but it will be some time before a pot shop can legally open across the street from the White House.
Here’s a rundown of what you need to know about cannabis in the US capital:
You can possess marijuana
The ballot measure, known as Initiative 71, allows people over 21 to possess up to two ounces of marijuana for personal use. You can also give up to one ounce to a friend or family member as long as they are over 21. You can grow up to six marijuana plants and have drug paraphernalia i.e. equipment for growing and consuming.
But you can’t sell it
The yes vote does not mean you can buy or sell or marijuana. DC’s council has said it will pass legislation to regulate the sale of pot but that will take some time and cannabis advocates say they aren’t expecting the first recreational pot shops to open until late 2016. That could come quicker if some of the city’s medicinal marijuana shops begin selling recreational pot.
Pot isn’t legal yet
The new law doesn’t come into effect straight away. It now has to go Congress for a 30 day review, beginning in January. In theory, the new Republican-controlled Congress could try to stop DC from legalising marijuana but that is considered pretty unlikely. If no one tries to derail legalisation, the new law should come into force in around April.
You can’t smoke on the street
The law does not allow you to smoke in public, in the same way that DC rules forbid you from having open containers of alcohol in a public place. Marijuana will also remain illegal in parts of DC controlled by the federal government, for example national parks or spaces around Congress.
Voters backed legal pot by a large margin
Around 65 per cent of voters backed Initiative 71, as the voting measure was formally known, compared to 28 per cent who opposed it. “That’s more than a landslide – it’s a consensus,” said Adam Eidinger, who led the legalisation campaign.
The campaign to legalise in DC was more about criminal justice than enthusiasm for cannabis
In Washington DC, where half the city’s population is black, the case for cannabis was made in terms of racial justice.
Proponents of legal pot argue that existing drug laws are used disproportionately to prosecute young black men and point to police figures to support their case. In 2010, 91 per cent of all marijuana arrests in DC were of black people. Three-quarters of all civil fines for cannabis use are handed out in the city’s black neighbourhoods.
“We dedicate this victory to all the people who are in prison right now for growing marijuana or having marijuana,” said Mr Eidinger. “They should all be pardoned and allowed to come home.
Source: telegraph
Share