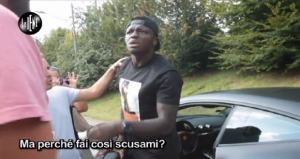 Biological father of Sulley Muntari, Alhaji Muniru Sulley has apologized to Ghanaians on behalf of the AC Milan man.
The midfielder was said to have assaulted a member of Black Stars management, Moses Armah Parker, during the Brazil 2014 World Cup.
The unfortunate incident cut short the player’s stay in camp during the Mundial, as he was stripped of his accreditation alongside compatriot Kevin Prince Boateng and has since been declared ‘unwanted’ in the Ghana team.
Muntari, unlike his victim who got a platform to tell his side of the story to the World Cup Commission of Inquiry, has since been silent on the matter.
Many have blamed the left-footed player for his behavior in Brazil ahead of the Ghana-Portugal last Group game.
But Alhaji Sulley, a former BA United/ Ebusua Dwarfs player, has apologized to the entire nation on his son’s behalf.
“I want the entire nation to forgive Sulley. What he did really didn’t go down well with me, but he is human, he is not as bad as it’s being perceived out there.
“He is my son, he doesn’t like cheating, if he is in a group and one is being cheated, he will make sure justice is served. He has helped a lot of people and players, but most people are hypocrites,” he said on Asempa FM.
Responding to whether he will instruct Muntari to personally apologise to the Medeama man, he said, “I think as a father, I represent my son, and the man in question told the Commission that he has forgiven him.”

Muntari, who has hit top form, has since July been distanced from the team, serving an indefinite suspension.