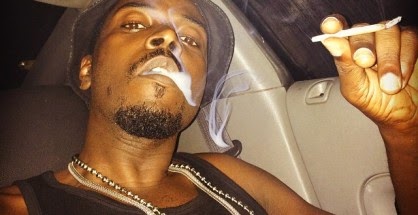 Hiplife Artists, Kwaw Kese, has been arrested by the police in Kumasi, for allegedly smoking cannabis in public.    He was arrested Saturday at a wine shop close to Plus Two pub at Nhyiaseo, a suburb of Kumasi.   The Police have ruled out bail and are processing him for Court.   ASP Charles Appiah, Head of Drug Law Enforcement Unit told Luv FM’s Erastus Asare Donkor, the musician was arrested around 11pm Saturday and has been in police custody since.   Kwaw Kese, popularly called Abodam, “was sitting in an open place in front of the wine shop with other friends and he was smoking cannabis,” ASP Appiah said.   He explained that a police patrol team saw him smoking the cannabis and consequently arrested him.   “We all know cannabis and he will not deny, he hasn’t denied,” the policeman said.   According to him, Kwaw Kese will be put before court on Monday on a provisional charge of use of narcotic drug without lawful authority.