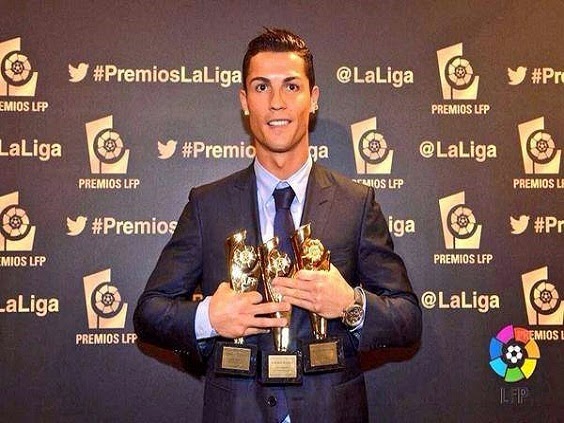 Real Madrid striker, Cristiano Ronaldo was named Spanish League’s best player among a hat-trick of awards he won at the Spanish top flight’s annual gala.
This is the first time the Portuguese internationa has beaten Barcelona’s Lionel Messi to La Liga’s top prize. He  also won prizes for the league’s best striker and best goal, for his back-heel against Valencia.
“It is a very good moment in my career,” Ronaldo said, later tweeting he was “happy and proud”.
The accolade comes as Ronaldo was also shortlisted for the 2014 Ballon d’Or, the award given to the world’s best player.
Argentina forward Messi, who also figures on the Ballon d’Or shortlist, had won all five previous La Liga best player awards since the prize was launched in the 2008-09 season.
Ronaldo finished top scorer in La Liga in 2013-14 with 31 goals, but was unable to fire Real Madrid to the title, with city rivals Atletico winning the league.
ENJOY IT !