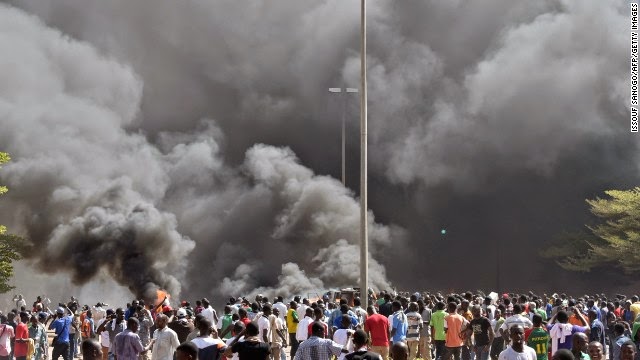 (CNN) — [Breaking news alert, 5:53 p.m. ET]
The military in the West African nation of Burkina Faso has dissolved the government and the Parliament, a military general said Thursday in the capital city of Ouagadougo.
“An interim authority will be set up in order to prepare the conditions for the return to normal constitutional order within a period of 12 months at the latest,” Gen. Honore Nabere Traore said.
The whereabouts of President Blaise Compaore were not immediately known, and it was not immediately clear if he had surrendered control of the country with protesters setting fire to the Parliament building in the West Africa country of Burkina Faso amid demands for economic change and political reform, President Blaise Compaore declared a state of emergency Thursday and dissolved the government.
Unrest has gripped Burkina Faso — a key ally for the West in the fight against al Qaeda– as protests against Compaore’s government turned violent in the capital city of Ouagadougo, culminating Thursday with demonstrators clashing with security forces.
Even as Compaore took the emergency measures, he asked in a government communique read on national radio for an end to the violence. He also withdrew a proposed constitutional amendment that included a provision that would allow him to seek another term in office, according to the communique.
Earlier in the day, Compaore, who has been in office since he took power following a bloody coup in 1987, made an appeal via Twitter, urging for a return to calm.
But it was unlikely to placate the opposition, which called Thursday for his immediate resignation.
In Bobo-Dioulasso, the country’s second largest city, protesters reportedly tore down a statue of Compaore. Photos: Unrest in Burkina Faso
The incident followed reports that a large group of protesters had stormed the Parliament building, where lawmakers were set to vote on a motion to allow Compaore to extend his 27 years of rule.
Footage aired by a number of the country’s media outlets show the Parliament building engulfed in flames.
Flights in and out of Ouagadougou have been suspended, according to the Burkina Faso Embassy in Washington. Embassy personnel told CNN that it was still issuing visas but that there were no flights at the moment.
U.N. Secretary-General Ban Ki-moon called on all groups to end the violence, asking that they “exercise calm and restraint.”
The West, particularly France, considers Burkina Faso a key ally in the fight against al Qaeda. The country was formerly known as the Republic of Upper Volta, when it was established in 1958 as a self-governing colony under France.
France urged restraint in the current situation. The French Foreign Ministry condemned the violence.

The African Union announced it would deploy troops alongside United Nations forces as part of a joint mission to address the unrest. 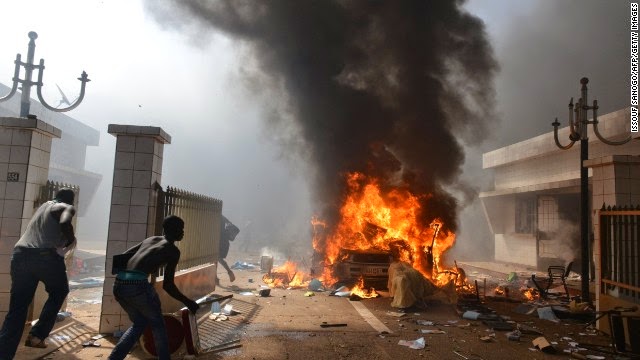